Pachtuwa was introduced to Prince Maximilian and Karl Bodmer by Mato-Tope, one of the chiefs of the Mandan tribe in 1834. Pachtuwa-Chta had been living peacefully with the Mandan. Described as a tall, handsome man, Pachtuwa-Chta was characterized as someone who couldn’t be counted on and described as a man who had killed many white men. He posed for Bodmer wearing a beautiful red buffalo robe and heavily beaded leggings and moccasins and carried in the crook of his arm a gunstock type war club. In exchange for his portrait, Pachtuwa-Chta accepted a picture of a bear in which Maximilian painted the bear and Bodmer provided the background. 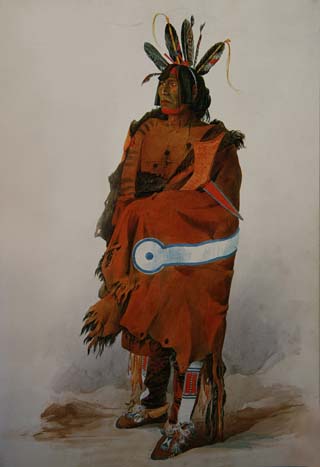