Mato-Tope was a Mandan Chief who also happened to be an artist. On paper, Mato-Tope himself recorded images from some of his battles. His portrait was painted by both Karl Bodmer and George Catlin who are said to have influenced Mato-Tope’s artistic style.

My sculpture of Mato-Tope is after a Karl Bodmer watercolor from about 1834. He stood proudly for Bodmer, adorned in his finest clothing with accoutrements that related to past victories of war. The wooden knife in his war bonnet is a reminder of a particular battle that Mato-Tope was involved in with a Cheyenne. The Cheyenne attacked Mato-Tope, wounding his hand, but Mato-Tope was able to disarm him, keeping the knife. This battle was one that Mato-Tope painted for Bodmer. The lance he held in his right hand killed an Arikara who had murdered his brother. The lance was also adorned with the scalp of an enemy. 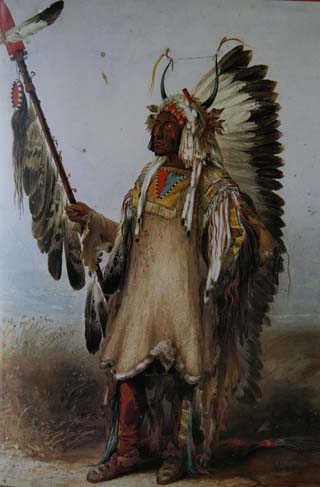